Zimbabweans from all backgrounds are this year experiencing the traditional Christmas spirit of merrymaking and togetherness, with shoppers congesting supermarkets yesterday while thousands of travellers took to the road or sought transport to visit their loved ones.

In Harare, people could be seen doing their last-minute shopping in preparation for Christmas today, which is being celebrated with a family rather than party event under the new normal owing to Covid-19 lockdown regulations.

Supermarkets and clothing stores were packed, with shop assistants battling to serve the large number of shoppers. 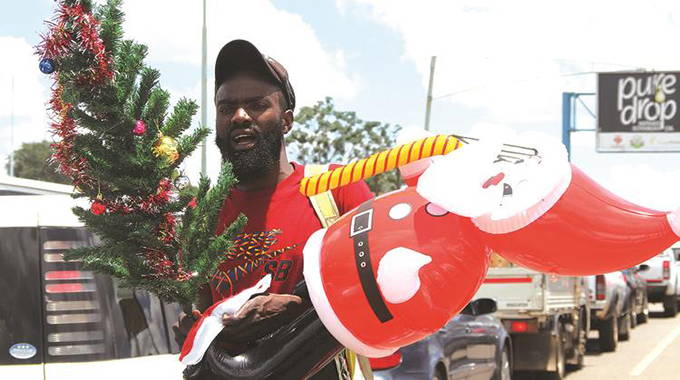 Money transfer agents such as Paisa, Mukuru, Homelink and Western Union were coping with long queues as people collected the remittances sent by their loved ones from abroad.

Some people were queueing at the agencies which deliver groceries bought in South Africa and Botswana or online.

Most people expressed joy at the price stability which has seen basic commodity prices remaining largely unchanged in the second half of the year after a particularly rough period of rising inflation.

At bus stations and undesignated boarding points, there was a lot of activity which led to pirate transporters hiking fares as the legal public transport system appeared overwhelmed.

A trip from the central business district (CBD) to Warren Park, which costs $16 on a Zupco bus, or $32 on a Zupco-registered kombi, cost $50 on pirate kombis and mushikashikas.

Touts were already in Christmas mood and could be seen imbibing pernicious brews, playing cat-and- mouse with police.

Harare resident, Mr Prichard Makomo, said despite the Covid-19 pandemic and lockdown regulations, this Christmas was poised to be one of his best over the last decade as he could now buy more groceries and clothes for his family.

“This year I cannot complain because prices of groceries have been stable and we have been given a choice to buy using the local currency or forex. I have bought my family a lot of groceries and I have also managed to buy two pairs of clothes for each of my children. If it were not for the lockdown, I wanted to take my family out for braai but we are just going to do it at home as a family because Covid-19 is real,” he said.

Chrispen Chimamuna said he could not wait to celebrate the day with his family.

He said he would spend this Christmas in Harare unlike in previous years where they would visit his rural home in Chimanimani.

“We wanted to travel and spend the Christmas in Chimanimani where I came from but this year, we had to avoid unnecessary movements because of the Covid-19 pandemic,” he said.

At the downtown area popularly known as “kuma tuckshop”, people were also observed jostling for goods.

One of the buyers, Sindiso Moyo said he had come to buy their groceries in that area as they were comparatively cheaper than in supermarkets if you had foreign currency.

“A two-litre bottle of cooking oil costs US$2 while in supermarkets it costs between $279 and $284 which is equivalent of US$3.30 at the auction rate.

The shopping trend is expected to continue today as some supermarkets will open for business today with retailers hoping to mop up people’s increased disposable incomes.

At Mbare Musika, and other passenger pick up points such as the blocks of Sam Nujoma Street north of Herbert Chitepo Avenue going northwards for Mashonaland Central, people could be seen jostling for transport, with private motorists recording brisk business.

As was the case on Wednesday, there were hundreds of people at Robert Mugabe Road and Fifth Street, outside Roadport bus terminus, where travellers to Mashonaland East and Manicaland waited for transport.

Chinhoyi continued to be a hive of shopping activity yesterday with people making last minute purchases for Christmas.

Most supermarkets in the town including the big OK Zimbabwe and TM Pick n Pay, were fully packed.

There however, appeared to be a high level of non-compliance with Covid-19 regulations in parts of the town centre raising fears of a spike in cases of the pandemic.

All was reported to be going on well in Masvingo, Mashonaland Central and Manicaland where people went about their business peacefully.