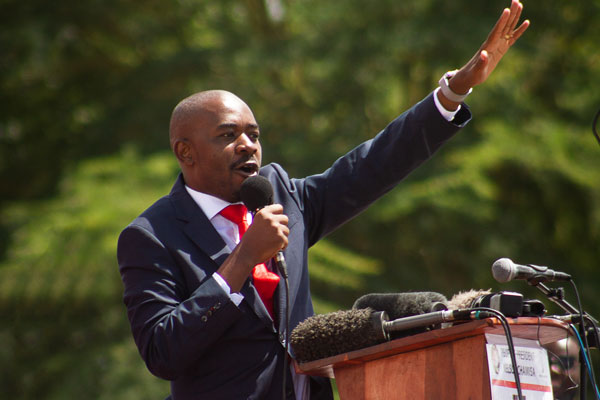 The CCC, which has been trending on social media over the past few weeks as a rallying call for opposition supporters, is the brainchild of MDC Alliance and former Zanu PF politburo member Jonathan Moyo.

Both Chamisa and Moyo yesterday dismissed Zanu PF’s attempts to hijack the project as “desperate moves by a party afraid of elections”.

In a letter to Zec dated September 20, 2021, Musungo’s party secretary-general Farai Zhou said: “We can confirm that our party’s president and 2023 presidential candidate is Ms Varaidzo Musungo. Our party logo (is) as appears at the top and bottom of this letter. In the interests of better communication, we are sourcing offices in Harare and will advise once we have
these.”

But Moyo, a formidable political schemer whose ideas have helped Zanu PF before, described the move as an inconsequential Central Intelligence Organisation (CIO)-driven farce.

“The hullabaloo over the purported registration of the Citizens Convergence for Change (CCC) is a farce which exposes the bizarre copycat politics that has gripped the jittery Zanu PF securocrats in the CIO who are dazed by the infectious power of CCC as rallying call for the unity of citizens across the political divide,” Moyo said.

“For the avoidance of doubt, an idea belongs to whoever conceptualises it and uses it first and does so in public, in an organised and documented fashion. Only people from Mars do not know that CCC is the intellectual property of the MDC Alliance and has been in existence for far much longer than September 8, 2021 when the Zanu PF and CIO copycats plagiarised the idea.”

In the run-up to the 2018 general election, Moyo threw his weight behind Chamisa’s candidacy, and recently offered to help fund the training of MDC Alliance polling agents on how to guard against vote rigging in the 2023 plebiscite.

MDC Alliance spokesperson Fadzayi Mahere said the party was not shaken by Zanu PF’s decision to hijack the idea.

“It’s clear that it’s Zanu PF doing this. This is desperation on the part of Zanu PF. They thought that they had finished us off, but they have since realised that we have come up with a concept which is bigger than the MDC in 1999. The wave is bigger than ever in the country. It has created the biggest momentum ever seen in the country in recent years and this wave is unstoppable, it has engulfed the whole nation. It’s a great idea whose time has come and nobody can stop it, just like (the late South African reggae musician) Lucky Dube said ‘nobody can stop reggae’. Nobody can stop this wave,” she said.

“We are not shaken, we know that these are shenanigans being done as a way of trying to divert our focus, but the convergence is a platform and an idea of building a new consensus and a new alliance by all the people of Zimbabwe, so wanting to reduce it into a political party is an act of desperation by the people who are panicking, who are scared of the election, who are scared of the people and Zimbabwean citizens coming together to demand real change. Their biggest problem is that they have a candidate who is very hard to sell.”

Efforts to get comments from Zanu PF were fruitless as its leadership was still holed up in a politburo meeting, its highest decision-making organ outside congress.