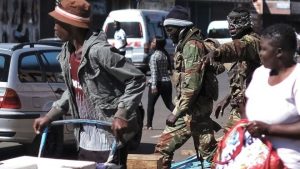 Businesses have shut in Zimbabwe’s capital, Harare, as the nation awaits the results from the heavily disputed presidential election.

Armed soldiers and police are on patrol, ordering people to “behave”.

Three people were killed in the city on Wednesday in clashes between the security forces and supporters of opposition leader Nelson Chamisa.

He says Monday’s elections were being rigged to give President Emmerson Mnangagwa victory.

The elections were the first since long-time ruler Robert Mugabe was ousted in November.

The polls were intended to set Zimbabwe on a new path following Mr Mugabe’s repressive rule.

Mr Mnangagwa said the government was in talks with Mr Chamisa to defuse the crisis and proposed an independent investigation to bring those who were behind the violence to justice.

“This land is home to all of us, and we will sink or swim together,” Mr Mnangagwa said in a series of tweets.

No violence was reported on Thursday. A truckload of armed policemen and soldiers were driving around the city shouting, “Behave yourself, people of Zimbabwe.”

A BBC reporter in Harare says the city centre is like a “ghost town”.

Riot police have also taken positions around the headquarters of the MDC Alliance.

Results released by the Zimbabwe Electoral Commission (Zec) show that Mr Mnangagwa’s Zanu-PF party has won the parliamentary election, with a two-thirds majority.

It has not released presidential election results, saying party agents were still verifying the result and there was “absolutely no skulduggery”.

Zec confirmed its website had been hacked, saying it took it down “within 11 minutes” of the attack.

Zanu-PF, which has been in power since the country gained its independence 38 years ago, denies there has been any rigging.