The Commonwealth Observer Group deployed by the Secretary-General to observe Zimbabwe’s Harmonised Elections on 30 July has released its final report. They are the first elections the Commonwealth has observed in Zimbabwe in 16 years. 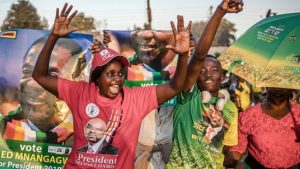 The Observer Group was led by John Dramani Mahama, former President of Ghana, and included 23 eminent persons.  A nine-person staff team from the Commonwealth supported it.

The Report highlights several positive aspects of the election, including: a markedly improved pre-election environment where all parties were generally able to campaign freely; peaceful, well managed and transparent polls on Election Day; and the participation of women as presidential candidates, polling officials, and voters.

However, the Group expressed concern about a number of technical and political shortcomings, which, in its view, unlevelled the playing field. These issues included the acute bias of state media in favour of the governing party; the Zimbabwe Electoral Commission’s limitations in the implementation of its mandate; persistent allegations of intimidation; and the unfair use of incumbency privileges. The Group further singled out the post-election violence, which resulted in fatalities, noting that it marred the final phase of the elections.

Because of these shortcomings, the Group concluded that it was unable to endorse all aspects of the process as credible, inclusive and peaceful.

In providing its recommendations, the Group recalled Zimbabwe’s relationship with the Commonwealth. The Report states:

“Zimbabwe enjoys a special historical relationship with the Commonwealth: it was in Harare in 1991, that Commonwealth Heads of Government agreed the Harare Commonwealth Declaration committing their countries to a set of core values, including democracy, the rule of law and human rights.  These values are reflected in Zimbabwe’s 2013 Constitution.  It is our hope that our recommendations and conclusions will contribute to their full implementation.”

Zimbabwe withdrew from the Commonwealth in 2003.  However election observation in a non-member country became possible when Zimbabwe asked to re-join the Commonwealth.  The Group’s Report will be considered by the Secretary-General as one aspect of the membership assessment process.