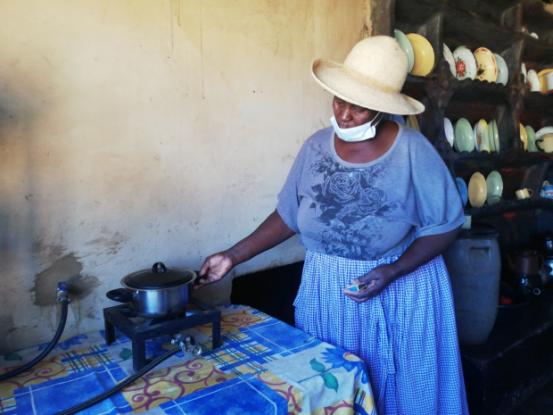 Zimbabwe’s efforts to promote widespread use of biogas – a renewable energy source – have been slowed by the high cost of biogas production. A new, low-cost technology using available materials aims to solve that problem.

For nearly a decade, Zimbabwe’s domestic biogas programme has promoted the use of biogas – the mixture of gases produced by the breakdown of organic matter – as an accessible and environmentally friendly fuel. Five years ago the government, in partnership with two Dutch-based development organisations, rolled out a $ 3 million project to install biogas units across the country.

But there was a problem. Uptake was slow due to the high cost of biogas processing plants, known as digesters. According to research by Jane Kaifa and Wilson Parawira of Zimbabwe’s Bindura University, only about 711 household, municipal and institutional plants had been built by 2019.

Beginning last year, however, a development project led by Care International Zimbabwe, a humanitarian agency, began kick-starting the biogas programme by offering low-cost digesters. They use existing materials such as metal drums and can be built for about $ 250, compared to the current $ 800 for home and $ 2,000 for institutional units.

Biogas is produced when organic matter, such as food or animal waste, is broken down by microorganisms in the absence of oxygen, in a process called anaerobic digestion.

“The main cost is the drums, which are easily available at low cost even in remote areas,” says Wishborne Mandhlazi of Care International. “In some cases drums can be had for free, especially in mining areas where they are used to hold chemicals.”

The biogas project is part of a broader programme of the Zimbabwe Resilience Building Fund, a long-term development initiative that aims to build up local capabilities. The broader programme is called “Enhancing Community Resilience and Inclusive Market Systems” (ECRIMS). Care International Zimbabwe is the lead organisation project.

By July 2020, the project brought low-cost digesters to 40 rural households in the Midlands Province in Zimbabwe’s south, and it plans to boost that number to 200 households. The project currently focuses on the Zvishavane and Mbwerengwa districts in Midlands Province.

The region has plentiful organic matter in the form of cow dung. A single cow produces on average about 10 kilogramme of dung per day, which can be turned into 400 litres of biogas. Cooking with biogas requires between 150 and 300 litres per person and meal.

Having a digester nearby saves time and effort. Kumbirai Mapfumo, a grandmother living in Zvishavane, no longer has to search for firewood as a cooking fuel. “I can now prepare meals using a biogas stove which is easy to use and reliable,” she says. “I use cow dung from the corral.” The resource is actually available without cost in rural areas.

A further bonus is conservation of the nearby forests. “We now use firewood only once in a while,” says Tembalenkosi Hove, a Mberengwa resident.

The next step in the ECRIMS biogas project will be to teach rural Zimbabweans to install their own low-cost digesters, following instructions from those who have already installed their systems. “Some locals have already expressed interest,” Mandhlazi says. “We are training them on installing the units so they can do this for others once the project is gone.”

Edington Mazambani, head of the Zimbabwe Energy Regulatory Authority, says the government plans to promote biogas technology nationwide. “Through the National Renewable Energy Policy, the government is promoting increased uptake of renewable energy technologies, including biogas,” he says. “Rural communities can rely on biogas as it is a tried and tested technology.”

Proponents of biogas note that it is a clean-burning fuel, producing fewer pollutants during cooking than most other fuels.

The production process for biogas is also environmentally friendly. It is a good example of the circular economy in action, recycling animal waste into useable energy.

“Biogas is a renewable and clean source of energy,” Mandhlazi says. “Gas generated through bio-digestion is non-polluting. Using gas from waste as a form of energy is actually a great way to combat global warming.” He adds that anaerobic digestion deactivates pathogens and parasites, thus reducing the incidence of waterborne diseases.

A by-product of the biogas production process is an enriched organic compound called digestate, which is a good supplement to, or substitute for, chemical fertilisers. According to Mandhlazi, the digestate can accelerate plant growth and resilience to diseases, whereas some chemical-based fertilisers can harm the environment. More­over, organic waste left uncollected can allow toxic liquids to drain into underground water sources, causing soil and water pollution.

In summary, “when compared to virgin natural gas obtained by drilling into the earth, biogas is clearly a more sustainable option,” say Tim Juliani and Pete Pearson of the World Wildlife Fund, a conservation organisation, in a blog post.

“And there are additional benefits of biogas,” they add. “Removing the abundant supply of animal manure and food waste from the environment prevents nitrogen pollution and runoff into water resources.”

On the other hand, there is a risk that pathogens harboured in the digester slurry could infect humans who handle the digestate or who eat crops fertilised with it, according to Benson Kibiti, spokesman for Power for All, an Indian government energy initiative. However, he adds that “the potential for biogas is huge in Africa, for both cooking fuel and off-grid electrification systems”.

Farai Shawn Matiashe is a freelance journalist based in Mutare, Zimbabwe.
matiashefarai@gmail.com