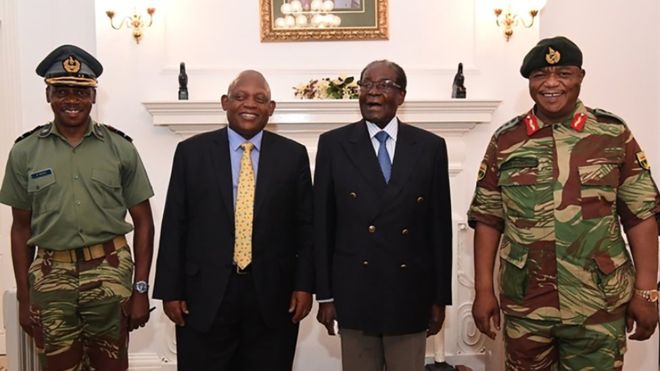 The military says it is “engaging” with the president and had made progress in targeting “criminals”.

Zimbabwe’s long-time President Robert Mugabe is reportedly refusing to step down immediately, despite growing calls for his resignation.

The 93-year-old was put under house arrest during a military takeover on Wednesday, amid a power struggle over who would succeed him.

The military said on Friday it was “engaging” with Mr Mugabe.

It also said progress had been made in targeting “criminals” around the president, but did not elaborate.

Several senior officials are said to have been detained since Wednesday.

In a televised statement, the military said it would advise the nation on the outcome of talks with Mr Mugabe “as soon as possible”.

President Mugabe held talks on Thursday with regional envoys and the army chief. Sources say he has so far refused to agree to move aside.

Opposition leader Morgan Tsvangirai said earlier it was “in the interests of the people” that Mr Mugabe “resign… immediately”.

The army moved in after Mr Mugabe last week sacked Vice-President Emmerson Mnangagwa, signalling that he favoured his wife Grace Mugabe to take over his Zanu-PF party and thus the presidency.

The BBC’s Andrew Harding, in Zimbabwe, says that if President Mugabe can be persuaded to step down officially it could help legitimise the military’s dramatic intervention.

On the streets, it is hard to find anyone who wants Mr Mugabe to stay on, our correspondent adds, but negotiating the manner of his departure and some sort of transitional agreement to follow could take some time.

So what’s going on in Harare now?

It is very unclear.

Alongside them was Father Fidelis Mukonori, a Roman Catholic priest known to Mr Mugabe for years, who has been brought in to mediate.

Sources close to the talks say Mr Mugabe – who has been in control of Zimbabwe since it threw off white minority rule in 1980 – is refusing to stand down voluntarily before next year’s planned elections.

“I think he is trying to buy time,” one source close to the army leadership told the AFP news agency.

Some observers suggest that Mr Mugabe may be trying to seek guarantees of safety for himself and his family before stepping aside.

Zanu-PF officials had earlier suggested Mr Mugabe could remain nominally in power until the party congress in December, when Mr Mnangagwa would be formally installed as party and national leader.

What is the view among Zimbabweans?

By Anne Soy in Zimbabwe

Many Zimbabweans almost instantly warmed to the military’s move to take control of the country, and confine President Mugabe to his official residence.

“The military has done a good thing,” says one bookseller. “They will ensure we get a transitional government.”

He is firmly convinced that Mr Mugabe’s 37-year rule is coming to an end.

There has been a sudden change of tone in the country, and the sense is that many Zimbabweans have been yearning for change.

Any change, it seems, would do.

What do South Africa and the region want?

South Africa is hosting millions of Zimbabweans who fled after the country’s economy crashed in 2008. It has a special interest in seeing stability restored.

Sadc also held a meeting in neighbouring Botswana and called for a regional summit to discuss the crisis. They urged Zimbabwe to “settle the political challenges through peaceful means,” the AFP news agency reports.

The African Union said it would not accept a military seizure of power. AU head and Guinea President Alpha Condé said he was “inviting the army to return to its barracks and return to constitutional order”.

Mr Tsvangirai, head of the Movement for Democratic Change-Tsvangirai (MDC-T) party and the main opposition leader in Zimbabwe, said Mr Mugabe’s immediate resignation must be part of a “negotiated all-inclusive transitional mechanism”.

He said this should lead to “comprehensive reforms for free and fair elections to be held” – views echoed by another opposition leader Tendai Biti.

Early reports suggested Mrs Mugabe had fled to Namibia, but sources now say she is in the family compound in Harare, along with some of the youth wing of Zanu-PF who had backed her.

On Wednesday, one of her key allies Kudzai Chipanga, made a televised apology for criticising the head of the army as a war of words raged prior to the military takeover.

Mr Chipanga is thought to be in army custody but insisted his statement was voluntary. Other senior members of the youth wing have also reportedly been detained.

How did the military takeover come about?

In the early hours of Wednesday, Zimbabwe’s military took over the headquarters of national broadcaster ZBC and issued a statement saying they were targeting “criminals” around President Mugabe.

Troops and armoured vehicles encircled parliament and other key buildings throughout the day.

On Monday, Gen Chiwenga had warned the army would intervene to end what he called the “purging” of Zanu-PF members “with a liberation background”, referring to the country’s struggle for independence.

Mr Mnangagwa is one such veteran of the 1970s war which led to independence.