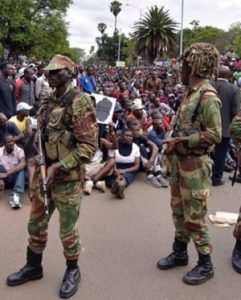 WASHINGTON — The National Patriotic Front (NPF) linked to ousted former president Robert Mugabe and his wife, Grace, has promised Zanu PF fireworks in the forthcoming general elections, saying it will defeat the ruling party if polls are free and fair.

The NPF, which has been holding consultation meetings countrywide, says so-called political commissars identified as members of the Zimbabwe Defence Forces deployed by the ruling party mostly in rural areas, should be immediately withdrawn as they are set to cause havoc in most communities ahead of the polls.

The Zanu PF commissars have already started collecting voting slips in villages across the country, a move that has been deemed as illegal by the government and Zimbabwe Electoral Commission.

“There are many things we seem to be getting from the grassroots and so we are saying let the (foreign) observers be given the opportunity to visit everywhere so that they can see what is happening. There is an issue of Zanu PF activists collecting BVR (Biometric Voter Registration) slips and the deployment of soldiers in rural areas.

“… We have people who come from the army who are all over the country. We are saying they must not be given a new name that they are commissars. They must be withdrawn so that people feel free to do what they want in the country.”

Suspected Zanu PF activists and members of the army terrorized Zimbabweans in the 2008 presidential election run off after the late opposition MDC leader Morgan Tsvangirai defeated Robert Mugabe in the first round though he did not get enough votes to form a new government.

More than 180 people, mostly opposition members, were killed while others were maimed in the clampdown that was spearheaded by the national army.

Mrs. Moyo further said she is prepared to die in order to restore the legacy of the late Zimbabwean vice president Joshua Nkomo and Mugabe, who fought hard to liberate the country from white colonial rule.

She said the Mnangagwa government has sidelined Zapu supporters, who were supposed to grace his Cabinet in proportional numbers with Zanu activists following the signing of a unity accord between the two parties in 1987.

“Nkomo and Mugabe wanted unity but Mnangagwa has decided to sideline Zapu cadres,” she said.

A few Cabinet members are drawn from Zapu, once led by vice president Nkomo.

The NPF is believed to be the brainchild of former Higher Education Minister Professor Jonathan Moyo, former Zanu PF political commissar Saviour Kasukuwere, former Youth Minister Patrick Zhuwao and others, who were allegedly targeted for arrest by the Zimbabwe Defence Forces which carried what it codenamed Operation Restore Legacy last November, claiming that some “criminals” were surrounding Mugabe.

Moyo, Kasukuwere, Zhuwao and members of the Zanu PF faction known as Generation 40 or G40 were ousted in the operation, which Mugabe described as a military coup.