The celebrated Zimbabwean novelist Tsitsi Dangarembga has been announced the winner for this year’s Pen Pinter Prize. 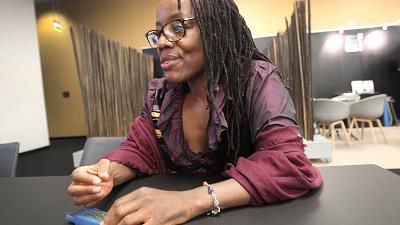 The celebrated Zimbabwean novelist Tsitsi Dangarembga has been announced the winner of this year’s Pen Pinter Prize.

The win means she will deliver a keynote address at a ceremony hosted by British Library and English PEN on Monday 11 October.

The PEN Pinter Prize was established in 2009 in memory of Nobel-Laureate playwright Harold Pinter.

The prize is awarded annually to a writer of outstanding literary merit resident in the United Kingdom, the Republic of Ireland, the Commonwealth or the former Commonwealth.

The winning writer must, in the words of Pinter’s Nobel Prize in Literature speech, casts an ‘unflinching, unswerving’ gaze upon the world and shows a ‘fierce intellectual determination to define the real truth of our lives and our societies’.

Dangarembga later commented by saying, “I am grateful that my casting – in the words of Harold Pinter – an “unflinching, unswerving gaze” upon my country and its society has resonated with many people across the globe and this year with the jury of the PEN Pinter Prize 2021. I believe that the positive reception of literary works like mine helps to prove that we can unite around that which is positively human.”

Dangarembga started studying medicine at the University of Cambridge but did not finish as her parents moved back to Zimbabwe at independence.

She switched courses to study psychology at the University of Zimbabwe, then went to study film in Germany.

Dangarembga stepped into the international limelight in 1988 with her debut novel “Nervous Conditions”, a coming-of-age story about a girl’s battle to escape poverty and get an education in the then Rhodesia, before the country gained its independence from Britain in 1980.

It was the first book published in English by a black Zimbabwean woman.

It won the 1989 Commonwealth Book Prize for fiction and in 2018, it was named by the BBC as one of 100 stories that shaped the world.

In 2020, the writer was arrested, bundled into a police cell and charged with inciting public violence after taking part in a two-women silent protest.

On the morning of July 31, the 61-year-old left home telling her husband she would be back shortly from staging a snap protest along a nearby road.

She was arrested with her friend as they stood on a street corner bearing placards demanding reform of Zimbabwe’s institutions and freedom for critics.