President Emmerson Mnangagwa is making moves to end the country’s international isolation and attract foreign investment to boost an economy in tatters, including allowing new private investment in the diamond fields. 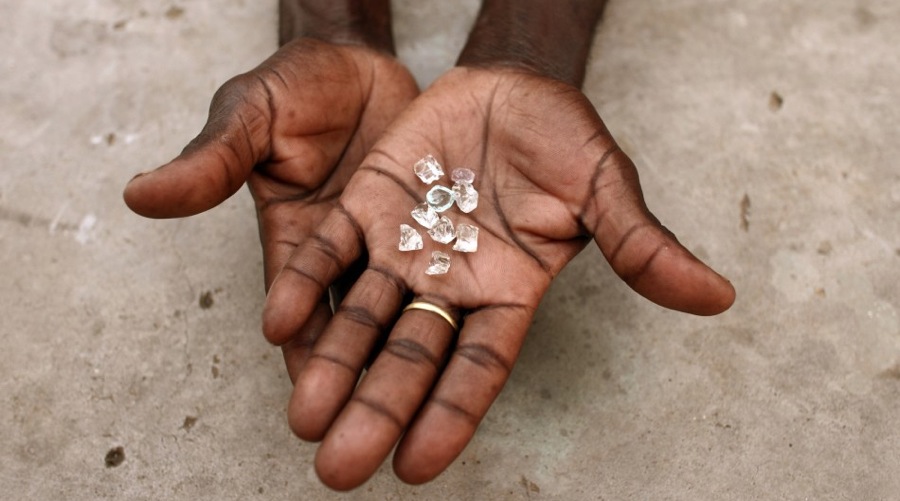 Most of the diamond fields are in Marange in eastern Zimbabwe, where production is dominated by the state-owned Zimbabwe Consolidated Diamond Company (ZCD). (Image: Screenshot from VOA News via YouTube)

Zimbabwean President Emmerson Mnangagwa is under growing pressure one year after taking office following the removal of long-time leader Robert Mugabe. That pressure may be about to increase if his handling of the diamond industry doesn’t reflect his alleged commitment to economic reform and anti-corruption.

That’s the main message of a report released Thursday by campaign group and accountability watchdog, Global Witness. According to the organization, good governance of the country’s diamond sector is a barometer of the direction that Zimbabwe is taking more broadly in the post-Mugabe era.

“It will attest to the credence of President Mnangagwa’s claims of a zero tolerance approach to corruption and transformed economic governance,” Sophia Pickles, Campaign Leader at Global Witness, says.

The management of Zimbabwe’s valuable diamond industry will indicate whether the new government is serious about reform and willing to match rhetoric with action — Global Witness.Most of the diamond fields are in Marange in eastern Zimbabwe, where production is dominated by the state-owned Zimbabwe Consolidated Diamond Company (ZCD). It is expected to produce 3.5 million carats this year, up from 2.5 million in 2017.

In 2008, hundreds were killed and thousands had to leave their homes as Zimbabwe’s military forced artisan miners to leave Marange after the early stages of the diamond rush.

In early 2016, Mugabe’s government went further, evicting all diamond mining firms, including two Chinese joint venture companies from Marange. It said at the time their licenses had expired after they declined to merge under a newly created state-owned mining firm.

Mugabe’s administration was frequently accused by Human Rights Watch and other critics of giving the army and security forces access to mineral wealth following the operation.

“Secrecy across Zimbabwe’s diamond sector has played a huge role in aiding rogue actors to gain a foothold, allowing gems that should have benefited the Zimbabwean people to be ruthlessly exploited putting them at risk of funding human rights abuses,” Pickle says. “Nothing encapsulates Zimbabwe’s lost opportunity like the diamond sector.”

Since taking power, President Mnangagwa has been vocal about promoting a new era for Zimbabwe’s economy and tackling corruption. The ousting of former President Robert Mugabe precipitated changes to some of the policies that have come to define the country over the past near two decades.

In particular, the Mnangagwa-led government is making moves to end the country’s international isolation and attract foreign investment to boost an economy in tatters, including allowing new private investment in the diamond fields.

Chinese companies have been lobbying the new government of Emmerson Mnangagwa to be let back in, but so far without success. Those firms include Anjin, Jinan, Diamond Mining Company, Mbada Diamonds, DTZ Ozgeo, Rera, Gye-Nyame, Kusena and Marange Resources.

Under the previous government, diamonds were ruthlessly exploited by the elite, Pickle says. Citizens saw very little benefit from the Marange find with billions of dollars-worth of the precious stones still unaccounted for, she notes.

According to Global Witness, the Zimbabwean government should take essential steps to achieve a transparent, accountable and well-governed diamond sector.

Among the recommended measures, the group cites  making all beneficial owners of diamond companies, and any private investors, public. It also suggest publishing detailed information about all diamond mining related revenue flows, disaggregated by company, year, and type of revenue stream.

“Opening up the diamond industry to public scrutiny will make it much harder for bad actors to permeate and devastate the sector and may give reputable investors and the international community confidence in the commitment of the new government to genuine reform,” Global Witness concludes.