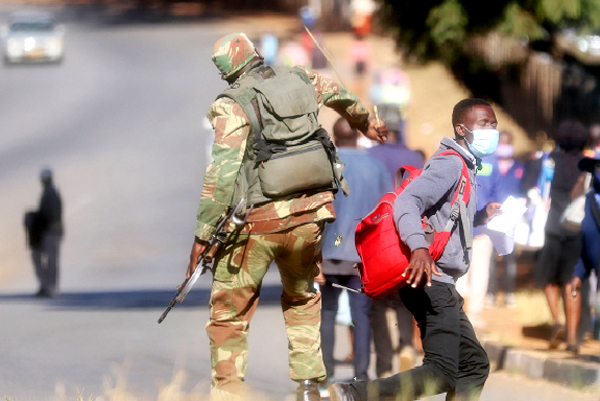 IF denials by the Zimbabwe National Army and the Zimbabwe Republic Police are to be taken for truth, our country has certainly become a dangerous place to live and invest in, where marauding bogus army and police officers can do things at will, cause suffering to the people even in broad daylight and get away with it.

The latest incident was the shutdown of Bulawayo by the army and police , with video evidence of police officers dragging a handcuffed man in the courtyard of a petrol station widely shared.

According to media reports, Standard Chartered bank was forced to close its only branch in town.

The bank sent a message to its customers saying it had closed its doors due to “circumstances beyond our control.”

However, as is now expected when government wants to spruce up its image, the Zimbabwe National Army has refuted reports that members of the armed forces moved in to take charge of Bulawayo central business. Who then are those people causing such mayhem and getting away with it, while members of the army, as claimed the Zimbabwe National Army deputy director of public relations Alex Zuva, are in the vicinity watching these things happen as their presence was only “assisting the Zimbabwe Republic Police in enforcing coronavirus lockdown regulations”.

Then of cause there is the denial of the arrest of MDC Alliance activists Joanah Mamombe, Cecilia Chimbiri and Netsai Marova, in which Zanu PF officials, government officials and the Zimbabwe Republic Police have all denied involvement.

The truth about the situation is that Zanu PF and government has for too long used the police force, the army and the intelligence services to brutalise suspected members of the opposition and ordinary citizens who express concern over the way government is managing the country.

Very often corroborated accounts have been given of how Zanu PF youths have been dressed in police or army attire and given guns to brutalise the opposition voices. The army and police officials will deny involvement, sometimes because they have not been involved, but they simply turn a blind eye when they see these atrocities being committed.