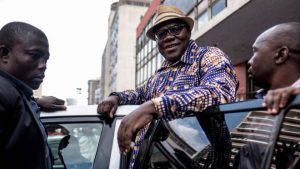 Biti’s trial finally commenced on Monday 10 December 2018 before Harare Magistrate Gloria Takundwa after he succeeded in having Michael Reza of the National Prosecuting Authority removed as the lead prosecutor on the basis that he was biased and unsuitable to preside over his prosecution.

After Biti pleaded not guilty to the charges of contravening the Electoral Act, his lawyers Beatrice Mtetwa, Alec Muchadehama, Gift Mtisi and Doug Coltart filed an application for exception to the charges arguing that the State had improperly split the charges from one to two that is violating section 66A(1)(a) – unofficial or false declaration of results prohibited, as well as section 66A(1)(b) – unofficial or false declaration of results prohibited.

In their application, Biti’s lawyers argued that he was served with a charge sheet that has two counts which are exactly the same and that it is unclear whether this was a deliberate improper splitting of the charges or sheer incompetence on the part of the State.

The lawyers argued that the purported charges brought against Biti do not disclose any offences.
Biti challenged the court’s jurisdiction to hear his case on the basis that he was unlawfully brought into Zimbabwe from Zambia in violation of the deportation and asylum laws of Zambia and of an order of court issued by the High Court in Zambia in breach of international law regarding the extradition of people facing offences of a political nature.

His lawyers also demanded to be furnished with some primary documents such as polling station and constituency returns known as V11 and V23 forms and to have full access to the Zimbabwe Electoral Commission (ZEC)’s sever, which has the entire information relating to the 2018 presidential elections.
Magistrate Takundwa postponed Biti’s trial to Tuesday 11 December 2018 to allow the State represented by Tafadzwanashe Mpariwa to respond to the human rights lawyer’s application.

Biti was arrested on 8 August 2018 after being returned from Zambia under unclear circumstances.
Prosecutors alleged that Biti, who is currently out of custody on bail, unlawfully and unofficially purportedly announced or purportedly declared that the MDC-Alliance party had won the harmonised elections held on 30 July 2018 when in actual fact ZEC officials, who are mandated to make the declaration had not yet declared the official results or winner, in contravention of the Electoral Act.
Six witnesses are scheduled to testify against Biti during the trial.