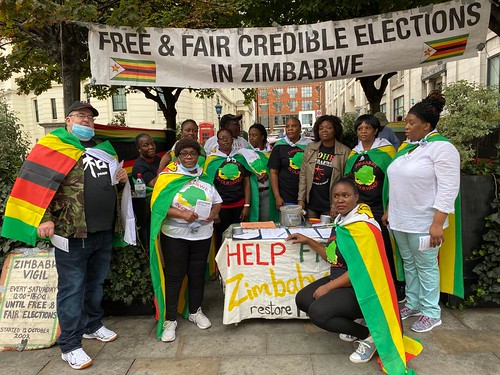 Nelson Chamisa’s MDC Alliance has accused Zanu PF and the Central Intelligence Organisation of hi-jacking his party’s proposed new name and registering it under the name of an obscure politician Varaidzo Musungo.

MDC Alliance spokesperson Fadzayi Mahere said: ‘We have witnessed an unprecedented attempt to decapacitate the main opposition by Zanu PF and its proxies. We expect more: the use of puppet political parties, the violation of democratic freedoms and the abuse of the legal system. Yet we remain unshaken.’ (See: https://www.timeslive.co.za/news/africa/2021-09-21-trickery-will-not-stand-in-our-way-says-zim-opposition-party-with-a-big-idea/.)

The latest Zanu PF move comes after the leader of the MDC T faction Douglas Mwonzora, who is favoured by the government, announced that he would contest the 2023 elections under the name of Chamisa’s MDC Alliance. Mwonzora is a leading figure in POLAD, a government body dismissed by Chamisa as a Zanu PF ‘cheerleaders’ club’.

Chamisa’s party has recently been trying out their proposed new name Citizens’ Convergence for Change (CCC), along with ‘Chamisa Chete Chete’, a ChiShona phrase that means Chamisa only. Interestingly, the name was suggested by former Zanu PF politburo member Jonathan Moyo, now in exile, and a supporter of Chamisa.

He said: ‘The hullabaloo over the purported registration of the Citizens Convergence for Change (CCC) is a farce which exposes the bizarre copycat politics that has gripped the jittery Zanu PF securocrats in the CIO who are dazed by the infectious power of CCC as rallying call for the unity of citizens across the political divide. What exposes the farce even more is that political parties in Zimbabwe are not subject to registration, and hence there’s no law for such registration and, in any event, ZEC is not a registrar of political parties.

‘For the avoidance of doubt, an idea belongs to whoever conceptualises it and uses it first and does so in public, in an organised and documented fashion. Only people from Mars do not know that CCC is the intellectual property of the MDC Alliance and has been in existence for far much longer than September 8, 2021 when the Zanu PF and CIO copycats plagiarised the idea.’ (See: https://www.newsday.co.zw/2021/09/zanu-pf-hijacks-chamisa-project/.)

Chamisa’s supporters are confident they can win the next elections. The Vigil is more anxious, seeing the persistent attempts to rig elections in Africa and this week witnessing the rigged election in Russia, where President Putin was declared to have won an unlikely landslide victory in parliamentary elections. (See: http://www.zimvigil.co.uk/vigil-news/campaign-news/1169-russian-election-2021-putins-united-russia-clings-on-to-supermajority). Many people believe that the opposition in Zimbabwe must, if necessary, boycott the next elections if they are not seen as free and fair.