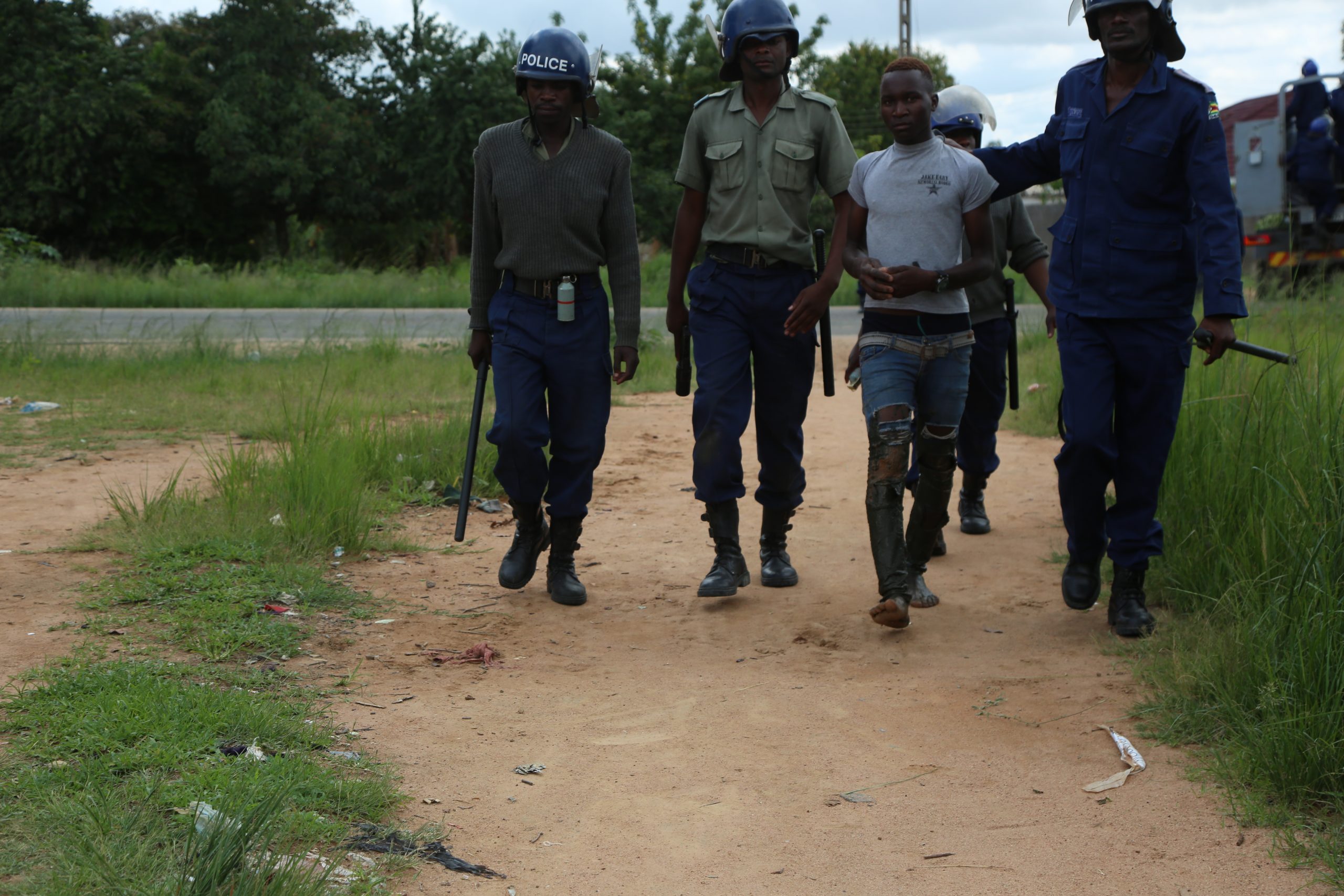 his unidentified young man had hidden from police who followed protestants into their homes in Epworth.

Lockdown robbery. That’s perhaps the best thing to call it.

The setting is a once-famous nightclub off Old Mazowe Road on the outskirts of New Marlborough. The time is 10pm on a Friday evening. Ten or so revellers have formed a ring round a smouldering braai stand as they sip the wise waters and roast pork, sausage and beef. The butchery is open, so is the off-sale bar where another motley crowd is aimlessly gathered close to the counter. The nightclub, on the northern end, is also open but the doors are locked.

Like a dull bolt, a police truck loaded with helmeted anti-riot police details in dark blue overall fatigue pulls into the nightclub’s premises, blocking the main gate. This is made to ensure that the cars parked inside don’t have an escape route. Pedestrians need not worry because the premises are as porous as the borders between Zimbabwe and its southern African neighbours.

Like mythical ants, the details dart off the truck, clutching the typical truncheons. A few have hand tear smoke canisters, one is brandishing an AK rifle and another, a CZ pistol. As ever before, the revellers scatter in all directions. Those locked inside the club hide in all sorts of places. Under the disused stage where famous musicians used to wow patrons, in the stinking toilets and behind the bar. Just about every place where the cops would collect them like anthill ants if they were not too sloshed themselves.

Of course, that’s the ordinary scene which you will always see whenever cops raid a drinking place during these lockdown and curfew days. But wait a bit. The butchery and off-sale bar attendants locked up the doors the moment the cops swarmed in. Locking themselves inside too, and hoping the “Mangongongo”, as these anti-riot cops are now known for beating the sides of their trucks with batons.

What comes next is the essence of what I’m trying to say here. With the precision that is normally associated with intense briefings at the parade square, the “SWAT” team bursts into the bars and butchery.

They pounce on all the remaining meat and grab cases of whisky as well as crates of beers. Just about everything they can lay their hands on. Everything is loaded onto the truck and off they go. They go back to their barracks at the Cranborne police reaction group (PRG) barracks and the party begins, well into the following morning and after.

The assistant inspectors who are normally in charge of these anti-riot sticks get their fair share from the loot. Most of the commanders who are deployed from their respective police stations drink well harder than fish, just like the details they lead who have hardly anything else to do during the day besides eating the beans and betting at the snooker table at the barracks. If the loot is big enough, some of it goes onto the black market for the extra dollar.

Never get fooled about this. This lockdown culture is not an isolated thing. If you have enough energy to sniff around, you will know this is a daily thing happening across the breath and length of this God-forsaken country called Zimbabwe. And it’s not limited to the PRG groups that are deployed on a regular basis.

Local police stations do the same thing, especially on hot days like Friday. The station commanders send their details to raid offending drinking places as if their next meal is going to come from, which you can’t exactly dismiss.

Here is the thing. When the cops raid drinking places, this is supposed to help law enforcement. Because, you see, lockdown rules still prohibit the on-premise sale of beer, and have a low opinion of people who are found at public drinking places especially after the commencement of the curfew at 6:30pm. That’s the law.

But these raids never have anything to do with law enforcement. For starters, procedure is violated. You see — and this is what criminal procedure says — when someone like a pub or butchery owner flouts the law and you are a law enforcer, you are supposed to effect an arrest. And you are obligated to collect whatever materials that you would want to produce as an exhibit or exhibits.

Now, if you look at these guys’ modus operandi, they take the “exhibits” and never bother about the suspects. They leave them behind because their mission is precisely to just collect only the “exhibits”. This, of course, is a culture as old as the British South Africa Police. Just that, now, the show is so open you would think it can earn one a Guinness Book of Records award.

That becomes a fairly easy mission to accomplish. It’s not as though these nightclubs operators and their attendants are saints. They are breaking the law. Because they are knowingly breaking the law, they become powerless to challenge these brazen lockdown robberies perpetrated by the law enforcers.

What is worrying, when all is said and done, is that senior police officers are turning a blind eye on this official criminality. The last time some of us checked, the Zimbabwe Republic Police had an internal intelligence unit whose statutory and regulatory role is to provide law enforcement checks and balances.

It’s, therefore, either the PISI unit is sleeping on duty or somewhere else or just conniving with these wayward officers, some of who are fairly senior as already seen.

Tawanda Majoni is the nationa coordinator at Information for Development Trust (IDT) and can be contacted on tmajoni@idt.org.zw