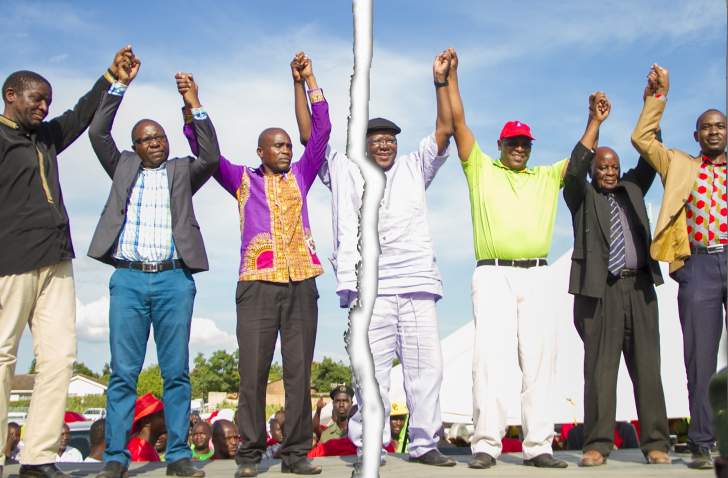 FOUR MDC legislators – Chalton Hwende, Prosper Mutseyami, Tabitha Khumalo and Lillian Timveous – were recalled from Parliament on Tuesday and their seats were declared vacant pursuant to the powers bestowed by the Supreme Court judgment of March 31, 2020.

In that ruling, leadership of the MDC was returned to Thokozani Khupe pending an exra-ordinary congress. The Nelson Chamisa formation had reacted with characteristic defiance, avoiding judicial scrutiny by insisting on the MDC Alliance identity. However, this ejection is the first indication that claims of the non-consequential nature of that judgment were misplaced. I previously suggested that adopting the MDC Alliance identity meant relinquishing that of the MDC which would come with loss of real power. In this post, I deal with some of the controversies associated with this development.

Many have questioned how MDC Alliance MPs can be subject to the whims of the MDC-T. These are political entities which competed against each other in the last election. Since the MDC Alliance legislators were elected on that ticket, it is only the alliance which can recall them from Parliament. This is an understandable, but mistaken reading of the Constitution. The floor-crossing provision in the Constitution does not protect the right of the party under which one contested, but the party to which one belonged: “if the member has ceased to belong to the political party of which he or she was a member when elected to Parliament …”

The MDC-T was a member of the MDC Alliance. This is the party to which the legislators belonged in 2018 and it is the party under the interim leadership of Khupe. Therefore, Hwende’s tweet confirming that he left the MDC-T in 2018 is confirmation of the grounds upon which he was recalled.

The role of the Speaker and president of the Senate has been previously enunciated as declaring vacancy of the seat upon receipt of notification. This appears to be what occurred in the National Assembly. The Senate is reported to have had two sets of letters and undergone a process of decision making.

This would represent new territory, that is, how to proceed on receipt of two letters with competing claims. Given the sequence of events, it appears both officers were on firm footing in their actions.

How can one person lead two parties in Parliament?

It is not yet clear whether the MDC Alliance is a political party.

Though many claim that it is a political party, its constitution remains elusive. The prevailing view is that these entities are factions of the same party.

Much confusion has been peddled by senior members of the Chamisa party. They insist that “registration” with Zimbabwe Electoral Commission (Zec), receipt of money under the Political Parties Finance Act and acknowledgement by the Constitutional Court (ConCourt) all point to evidence of the existence of a political party. This is not true. There is no registration of political parties in Zimbabwe. In other words, there is no statute whose requirements are met to confirm the existence of a party. It is established by its own constitution. This was stated by the ConCourt in the case of Madzimure vs Senate president CCZ8/19 :

A political party is a product of a voluntary association of people who share a common ideology …. It is constituted in terms of its own constitution and as such is a legal entity independent of members.

Therefore, it is not the Electoral Act, Political Parties Finance Act or Parliament which confers the status of a political party. This is done by the party’s own constitutive documents. When one approaches Zec to participate in elections, Zec is not conferring legitimacy on a political entity, but merely accepting its participation in elections.

Similarly, the Political Parties Finance Act is a mechanism for public financing of electoral participation rather than a registry for conferring status on political entities. The MDC Alliance agreement states that it is a non-compete pre-election agreement.

There is no evidence that this pre-election pact evolved into a political party as no alliance party constitution has ever been made public. Even if such constitution was made public, it would not prove that this party participated in elections as it was only constituted thereafter. In other words, those legislators participated in elections on behalf of the alliance as a coalition rather than a political party.

This means Khupe leads a party and an alliance of parties. Both the late Morgan Tsvangirai and Chamisa led the alliance and their respective political parties as well. However, the important difference is the fact that Khupe leads two entities which competed against each other in elections.

This seems counter-intuitive, moreso given the different electoral outcomes for both entities. It is the product of the Supreme Court judgment which effectively treated these entities as factions of one party. It is not unheard of for a person to be a substantive leader of one entity and interim leader of another, even if it presents a conflict of interest. In the absence of a law being violated, this eventuality will continue to shape our reality.
They should all resign en masse?

Many have also suggested that all MDC Alliance MPs should resign in solidarity with their colleagues and trigger a mini-general election. This would avoid parliamentary ejections and take away leverage from the Khupe camp by forcing matters to be settled at the polls. There are other considerations to be made together with such a bold move:

lIt is not apparent when such by-elections would be held in light of the COVID-19 global pandemic. Many countries have been legislating for postal ballots to avoid in-person contact at the voting booth. The time needed for such reforms, in the broader context of containing the pandemic, may delay the prospects of the by-elections.

A quick-fix and swift return to Parliament might not be feasible in the circumstances. It might lead to a protracted period outside of the Legislature with no input in parliamentary committees, no participation in inter-parliamentary forums and no capacity to hold the Executive accountable.

lAny such by-election would probably need to be under a name other than MDC, MDC-T or MDC Alliance. These have either been relinquished by the Chamisa camp or been subject to effective control by the Khupe camp. There is no longer room to hide under the subterfuge of the MDC Alliance. This might actually meet the demands of supporters who want an entirely new identity which does away with the continued struggles with Khupe’s camp.

lMost importantly, it is not just MPs who are subject to recall. In terms of section 278 of the Constitution, members of local authorities can also have seats declared vacant. Khupe could recall MDC mayors and councillors, meaning the Chamisa camp would need to similarly consider relinquishing control of all 26 local authorities it won in the 2018 elections and wait for by-elections after surrendering power in key urban centres. Such a radical move would be highly presumptuous, destabilising and create even more uncertainty.

As has become customary, we were served with a copious dosage of political deflection with everything presented as the handiwork of Zanu PF. The late former President Robert Mugabe always asserted that he was not concerned with Tsvangirai, but his handlers in Britain and the US. The Chamisa camp has adopted the same approach. Nothing that is done by Khupe is taken as an exercise of agency by an independent and determined woman. Rather, it is interpreted as evidence of a big man behind her throne. Let us take a step back and consider that when Tsvangirai recalled Tendai Biti and others in 2014, Parliament complied. When Chamisa recalled Khupe in 2018, Parliament complied. It is only now that it is people from the Chamisa camp that are recalled, that parliamentary compliance with notification of recall is labelled fascist and unacceptable – a jaw-dropping double standard.

Polad has been presented as evidence that Khupe is a Zanu PF pawn. This is the same argument used against Welshman Ncube, David Coltart and others in 2005, with Polad being the contemporary equivalent of the Senate. These appeals to Zanu PF are unhelpful. They take away individual agency, ignore independent decision and unduly credit Zanu PF as an omniscient, omnipotent political player. While this is effective at discrediting members of the opposition, it builds a perception of Zanu PF invincibility as the ultimate chess player that is always ten moves ahead of the main opposition. This lauds Zanu PF for a tactical nous it does not possess while entrenching partisanship through reductionist reading of everything as a simplistic binary of pro/anti Zanu PF.
Way forward

The current situation highlights the limitations of headstrong defiance as a strategy to deal with adverse court rulings. It is a reminder that reality cannot simply be spoken into existence.

Rather, it should remind popular leaders to actually show leadership. It was only after Tsvangirai lost in the 2013 elections that he thawed relations with Ncube and was open to forming a coalition. What will it take for his successor to similarly realise that opposition forces are stronger together?

Those who call these internecine battles a distraction are absolutely correct. It is a zero sum game; every moment spent fighting opposition members is at the expense of confronting the national crises.

Leadership surely involves more than securing millions of votes; it must be inclusive and bring people together – even those viewed as highly objectionable. The MDC Alliance is Tsvangirai’s legacy and it would behove his successor to make that tent a little bigger, if only for the sake of the democratic movement. If that cannot be done, we shall be treated to an endless spiral of factional confrontations which have little to no effect on Zanu PF’s dominance of local politics.