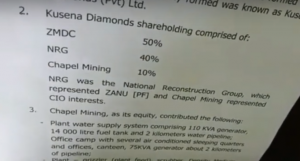 A secret document appears to indicate that a ZANU-PF company named National Reconstruction Groups holds a hidden stake in one of Zimbabwe’s diamond companies.

This month, the report of Zimbabwe’s Parliamentary Enquiry into missing diamond revenues detailed some of the hidden interests in the country’s multi-billion dollar diamond industry, notably the security services. But despite the Parliamentary Committee hearing testimony from a procession of former government and security officials, gaps in the final report suggest that full disclosure is still not the order of the day.

A document seen by Global Witness indicates that a company named “National Reconstruction Group, (NRG), hid a stake, held by ZANU-PF, Zimbabwe’s ruling party, in one of the diamond companies. Yet no mention was made of this during the Enquiry.

In September 2017, Global Witness reported that the Central Intelligence Organisation (CIO)—Zimbabwe’s feared and highly partisan spying agency—held a secret stake in a diamond mining company named Kusena Diamonds. In a startling admission, the CIO’s former Director, Happyton Bonyongwe, confirmed this secret source of off-budget funding in his appearance before the Enquiry.

A private document, seen in possession of the former Director during the Hearing, however, appears to indicate that ZANU-PF may also have secretly benefitted from the country’s diamonds through a stake in Kusena Diamonds. The stake appears to have been held by a ZANU-PF company named “National Reconstruction Group.”

An extract of the document reads:

A document, seen in possession of the former CIO Director during the Hearing, appears to indicate a ZANU-PF company named National Reconstruction Group had a stake in Kusena Diamonds. 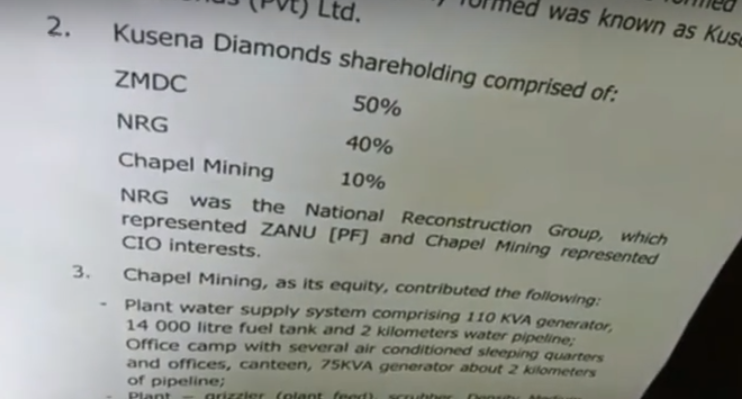 A document, seen in possession of the former CIO Director during the Hearing, appears to indicate a ZANU-PF company named National Reconstruction Group had a stake in Kusena Diamonds.

This information does not appear to have been disclosed to the Enquiry, despite being in possession of one of its key witnesses, and there is no record of it in the Enquiry’s final report.

Global Witness has not been able to independently verify this information, nor study the full document the extract is taken from. Some details in the extract, including the concession blocks allocated to Kusena Diamonds, are, however, consistent with what Global Witness has previously reported.

The use of secretive shell companies to conceal off-budget financing to Zimbabwe’s security forces has been a consistent feature of Zimbabwe’s diamond sector. But there has been no previous public indication that the ruling party may also have secured a hidden stake in the industry.

The possibility that a ZANU-PF government awarded a diamond-mining licence to a company in which it held a major stake presents a potentially serious conflict of interest. It also potentially limits oversight and transparency in a key part of Zimbabwe’s democratic system by securing the ruling party a hidden source of finances.

Secrecy has been one of the defining features of Zimbabwe’s diamond industry. Parliamentary Portfolio Committees have been amongst the few groups able to effectively probe the sector. A 2013 Enquiry, led by the late Edward Chindori-Chininga MP, reported sustained resistance to their investigations, which had revealed serious concerns about the government’s selection of private investment partners in the country’s Marange diamond fields.

Five years on, and it is unclear how much has changed, despite promised reforms. During the latest parliamentary hearing, Zimbabwe’s former Permanent Secretary in the Ministry of Mines noted that “there are syndicates that are very sophisticated in the country and outside the country and (…) many beneficiaries get involved to ensure that the truth never comes out.”

And while current and former officials from the Zimbabwe’s Police and Central Intelligence Organisation attended the Hearing, no official from Zimbabwe’s Army—one of the principal beneficiaries of diamond funds—appeared before the Committee.

Zimbabwe’s first elections since the resignation of long-time President Robert Mugabe are scheduled to take place in less than two months and his successor, President Emmerson Mnangagwa, has given assurances that they will be free and fair.

In light of Zimbabwe’s troubled history of election violence and manipulation, transparency in campaign and election financing is key to their credibility. Indications that the ruling party holds commercial vehicles it is unwilling to disclose is at odds with the government’s promises of a decisive break with the practices of the past.

A new government, led by President Mnangagwa, is determined to present an image of change and reform. For the time being, however, it seems that in some areas, the old ways may still prevail.