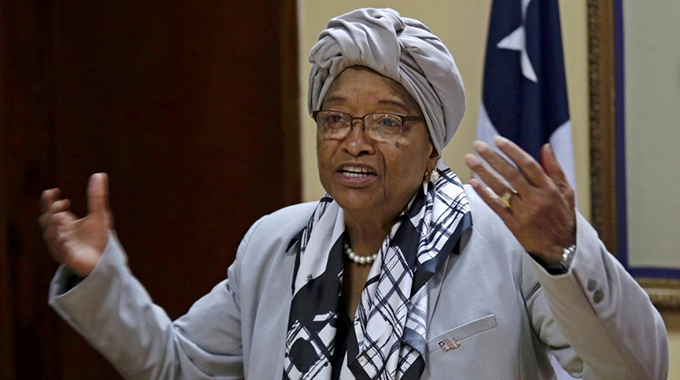 In a statement last Friday, the joint mission said it had received accreditation from the Zimbabwe Electoral Commission for it to commence work in earnest.

Mrs Sirleaf expressed her commitment to observing the elections.
“These elections provide an opportunity for Zimbabwe to make a clear break with its past that would be significant not only for the Zimbabwean people, but for all of Africa,” she was quoted as saying.

Congresswoman Bass added: “I am delighted to be part of the leadership of this joint IRI-NDI international election observation mission. We hope our presence will help contribute to more credible elections.”

In addition to the leadership, the delegation will include 22 short-term observers who will be arriving on Tuesday.
They will join the 25 long-term staff who are already in Zimbabwe, including 14 long-term observers covering all 10 provinces of Zimbabwe.

The IRI-NDI observation effort, which began with an in-country presence on April 23, also included a June 3-8 Pre-Election Assessment Mission, which issued a statement.

In preliminary assessment of the pre-election period, the mission gave a thumbs up to Zimbabwe’s elections.
The mission said it will observe the polls in accordance with the Declaration of Principles for International Election Observation and Code of Conduct launched at the United Nations in 2005 and will base its findings on international standards for elections. It said its approach would be consistent with regional instruments to which Zimbabwe is a signatory, including the African Union Declaration on the Principles Governing Democratic Elections in Africa and sadc Principles and Guidelines Governing Democratic Elections.

“All activities will be conducted on a strictly independent and non-partisan basis, without interfering in the election process and in conformity with the laws of Zimbabwe,” read the mission’s statement.

Addressing journalists in its pre-election assessment last month, the mission said the decision by Zimbabwe to invite international observers this time around was a milestone, coupled with the peaceful environment obtaining in the country.