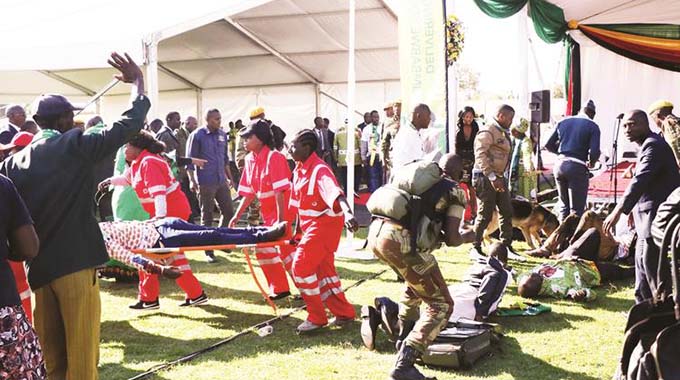 Sharon Hofisi Legal Letters
Without doubt, July 30 2018 will have a profound impact on Zimbabwe’s path to economic growth, social cohesion, political stability and an entrenched culture of constitutionalism. Today I would like to emphasise on the need to shun electoral violence in all its forms.

The act of terror at a ZANU-PF campaign rally has forced us to return to the past electoral episodes where peaceful campaigns seemed to be a pipedream. The attack is clearly a major obstacle of proper peace in this electoral cycle.

Three things must be singled out from the macabre attack. Firstly, human security has to be configured using intra-party threats. We used to witness inter-party violence and strongly hope that intra-party violence of this magnitude must be urgently contained. Essentially though, all peace-loving Zimbabweans must make an in-depth analysis of the downsides of any form of violence. They must ultimately make proper commitments to holding free, fair and credible, genuine elections which are vital for the greater development of our polity.

Secondly, progressive democracy is under threat in our polity. The attack holds back our progress as a people in all spheres of our lives. The core of this threat seems to lie in our failure to embrace the gains of our constitutional democracy, in the insidious need to ostracise rivals through violent acts of criminality, in blowing off the growing wave of political tolerance and in our failure to weigh the likely benefits of transformational politics in Zimbabwe.

Thirdly, the terror act is closely linked to the dangers of repressive and personality politics. Credit must, however, go to our current and prospective leaders who were quick to condemn such acts. And this was done at the highest level of Government through the Presidium and at the highest level of opposition politics through the voices of leaders such as the MDC Alliance’s Nelson Chamisa.

Added to the above positions are swift reactions by African institutions. The African Union and the Southern African Development Community were quick to condemn the terror acts. They emphasised the need to respect democratic fundamentals and I consider their reaction to be extremely important for Zimbabweans to commit to proper peace during this electoral period.

There is encouragement that our internal problems that may affect the credibility of our elections must be resolved through means which give peace a chance. Such ways will enable us to meet the challenges to constitutional democracy in a holistic way.

Predictably, most party supporters are now afraid to mix and mingle with their prospective candidates as a result of the attack. We can now see that terrorism or any other form of electoral violence constitutes the main stumbling block for the realisation of constitutional rights such as the right to participate in the cause of the political party of one’s choice.

Since the holding of electoral campaigns is part of the electoral process, we have to find possible ways of tackling the ripple effects of any form of violence. For instance, the attack demands that party supporters and the generality of citizens be security conscious at all material times. They must also work with security institutions where possible to expose security threats. We have heard calls from the presidium that candidates who feel their security is under threat may receive State protection in this election.

Other events that can yield proper peace in Zimbabwe come to the fore. The Zimbabwe Electoral Commission’s invitation of political parties and observers to witness the printing of ballot papers by Fidelity Printers and Printflow is one such important way of building our electoral confidence and correcting our mistakes of the past. This is so since of late opposition candidates and observers had been sidelined in such key areas of the electoral process.

Also important is the fact that Zimbabwe is moving towards the realisation of the Second Republic through devolution. We seem to have rediscovered introspection and self-introspection at all tiers of Government and these are significant steps towards progressive democracy. We need to prepare for this realisation by shunning violence in all its variant forms. Oversight institutions, especially civil society and the academia, have to find ways to add their voices of conscience in the clarion calls for proper peace.

I use the phrase “proper peace” continuously here since we are not able to deal with all incidents of political intolerance at once. We all have to pursue a self-critical approach to our political and social engagements. I think the terror attack is, along with the 2008 violence, another undesirable electoral legacy Zimbabwe has witnessed in a decade.

In all this, we must not stop believing that it is possible to commit to proper peace and collectively, get to understand that goodness is the only investment which pays for Zimbabwe. We need to teach, preach and practise proper peace by encouraging all sections of our society to respect the sanctity of human life and human dignity.

Certainly, there is a danger of reviving violent electoral practices. But a democratic state should always be prepared to commit to its chosen democratic values within the framework of its constitution. In this struggle, both the ordinary Zimbabwean citizen and the political players must practically strive to be the architects of a democratic and peaceful polity.

Sharon Hofisi is a lecturer in Law and Public Administration. Feedback: sharonhofii@gmail.com