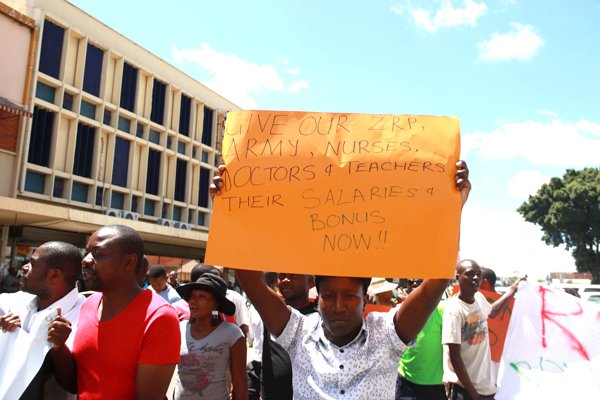 TEACHERS’ unions yesterday vowed to urge their members to embark on yet another go-slow as schools open for the second term tomorrow to press government to improve their working conditions, particularly their inflation-ravaged salaries.

Schools open tomorrow at a time workers’ salaries have been eroded five-fold as the Real Time Gross Settlement dollar continues to lose value against the United States dollar, triggering a wave of price hikes.

Progressive Teachers’ Union of Zimbabwe (PTUZ) secretary-general Raymond Majongwe told NewsDay yesterday that their members would report for duty as usual on Tuesday, but embark on a sit-in as they push for fresh salary negotiations because they were currently financially-incapacitated and demotivated.

Last term, teachers embarked on a similar industrial action, prompting government to award them a salary increase, which has since been eroded by rising inflation.

“No person will ever lead a war without counting whether his soldiers are in the barracks or not. So, we are simply going back to school to make sure that we create a strategy that must take us forward,” Majongwe said.

“Our salaries have just gone below US$80 and we are talking of people here who are degreed,”Majongwe said.

“People have families to take care of, but it seems government seems to be insensitive or they are busy looking somewhere else. The painful part is we have patriotic teachers who want to turn up for duty, but it is almost impossible we are going back to exactly where the circle started. Teachers are incapacitated.”

He said it was unfair labour practice for government to come up with a plan that benefits a certain segment of the public service.

Teachers were last time forced to abandon their strike after government made some concessions, but very little of what was agreed on was implemented.

Amalgamated Rural Teachers’ Union of Zimbabwe president Obert Masaraure yesterday said what government had promised civil servants early this year, when they went on strike, was not
genuine and an industrial action was imminent.

“Our members are going to school, but they will not be working. They are simply going to log in, but will not be undertaking any duties. We will likely call for a complete withdrawal of
labour in the first two weeks,” he said.

“The promises by government were not sincere. Our members are failing to access the promised residential stands and duty-free cars.”

Government withheld salaries for some teachers who went on strike early this year over poor salaries and working conditions.

Some of the teachers claim they had been receiving death threats from suspected State security agents.

But Majongwe said they would keep on fighting for a better salary.

“Government may try to come up with laws to say people cannot demonstrate, but that is futile because that has been tried elsewhere. We are ready for them and we will keep fighting. As
PTUZ, we are not going to relent and be intimidated. We will continue saying what they do not want to hear,” he said.

However, Zimbabwe Teachers Association chief executive officer Sifiso Ndlovu said their members would be going to school when schools open tomorrow to demonstrate their love for
learners and the teaching profession, albeit under difficult circumstances.

He said the much-publicised April salary rise had come to naught and the promises made by government when they suspended their strike early this year had not been realised.

“The duty-free motor vehicle benefit has been committed to in principle and through a statutory instrument legalising that benefit, but the practical realisation of the benefit has been
shackled by absence of administrative instruments guiding application of the same. Housing benefit, promised as land for educators, has not moved from the realms of rhetoric,” Ndlovu
said.