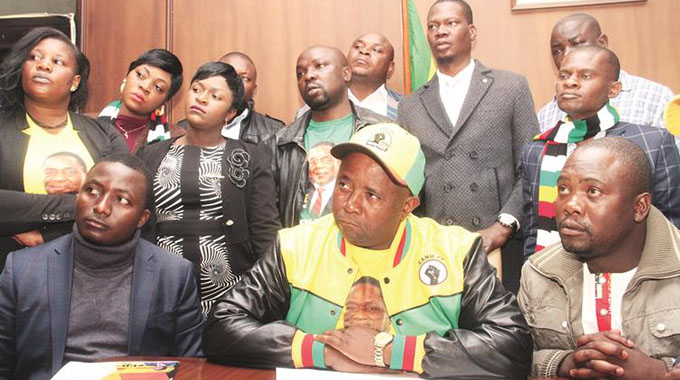 Felex Share Senior Reporter
Zanu-PF has taken a firm foothold ahead of the July 30 harmonised elections after it landed 46 wards in various local councils unopposed as opposition political parties failed to field candidates. The Zimbabwe Electoral Commission (ZEC), in terms of Section 125 (4) of the Electoral Act, yesterday published names of candidates nominated to stand in local government elections.

The Nomination Court sat on June 14.
The ZEC list showed the opposition failed to field candidates in 46 wards countrywide and most of these are in the rural areas.

Zanu-PF and political analysts said the development was a foretaste of the disaster awaiting opposition political parties in the polls.

The ZEC list shows the MDC alliance, a coalition of seven political parties, has also fielded more than two candidates in several wards.

The ruling party also grabbed another ward in Matabeleland North.
Zanu-PF spokesman Cde Simon Khaya Moyo said the head start showed that the revolutionary party meant business.
He said instead of laying the ground ahead the polls, opposition parties were focusing on endless complaints which lacked legal standing.

“This is a sign that Zanu-PF is a mass party and is everywhere while other parties are sprinkled here and there,” he said.
“We must take heed that this foretells what is going to happen during the elections. This is because Zanu-PF is a party with history, which liberated this country from the yoke of colonialism. Despite the hardships the country has gone through by the way of imposition of sanctions after the execution of our land reform programme, the party remained resilient and has moved on and indeed has very clear policies and programmes which are in sync with the people’s aspirations.”

Cde Khaya Moyo added: “There is no doubt that the new dispensation has indeed opened another chapter which gives hope to the people under the stewardship of President Mnangagwa.”

Association of Rural District Councils president Dr Killer Zivhu said Zanu-PF was driving a lot of developmental projects in rural areas and opposition parties would not win any ward.
“The majority of Zimbabweans are in the rural areas,” he said.

“They are the ones who fought the liberation war and they understand what independence is and why it should be protected.
“This means they understand why Zanu-PF should continue in power. There is no violence and intimidation and the revolutionary party is winning uncontested and this shows that it is a people’s party. Moreover, there are a lot of improvements and developments taking place in rural areas. People feel they have to give President Mnangagwa more years to drive them to prosperity.”

Political analyst Mr Tafadzwa Mugwadi said failure by opposition parties to field candidates in some wards showed that Zanu-PF was the only national party.

“It can contest any post in every part of the country while all other parties are quasi-sectarian movements that are urban-oriented instead of being national,” he said.

“Equally, it is clear that Zanu-PF and its presidential candidate are poised for a clear and indisputable victory because they have a foothold in 46 wards where opposition presence is patchy. That is why some opposition parties are throwing spanners in the works in a desperate attempt to solicit for sympathies ahead an imminent defeat. Strategically, the opposition has failed to coordinate themselves ahead of the elections because they have no presence across the length and breadth of the country.”

Another political analyst, Mr Goodwine Mureriwa, said the development showed lack of readiness on the part of opposition parties.

“This also shows the penetrative capability of Zanu-PF in its strongholds, particularly rural areas,” he said.
“This is a self-admission of a minority status by the MDC Alliance and other parties ahead of the national elections. You psychologically start from a position of inferiority and this generates apathy in candidates and supporters alike. Clearly the opposition faces inevitable defeat amid numerous unreasonable complaints, threats to boycott and premature efforts to call for a post-election inclusive government,” he said.

Power contestations in the MDC Alliance has also seen them fielding two candidates each in several National Assembly constituencies.