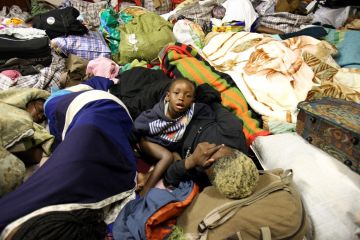 BY PRIVELEDGE GUMBODETE
ZIMBABWE is home to over 20 000 refugees and asylum seekers, mostly from sub-Saharan Africa, the United Nations High Commissioner for Refugees (UNHCR) revealed yesterday.

In a statement, UNHCR said the bulk of the refugees were at Tongogara Refugee Camp in Manicaland province.

“Zimbabwe is home to more than 22 000 refugees and asylum-seekers. Most refugees live at the Tongogara Refugee Camp in Manicaland province and a small population lives in urban areas,” the statement read.

Countries such as DRC and Mozambique have been hard hit by insurgency attacks, forcing some of their citizens to seek refuge in neighbouring countries.

UNHCR’s assistant High Commissioner for protection, Gillian Triggs, applauded the Zimbabwean government for creating a conducive environment for the nearly 15 000 refugees staying at Tongogara Refugee Camp, and for providing them with cash for their day-to-day needs.

“Besides, access to cash to facilitate their daily lives is fundamental for refugees to live in dignity. I’m pleased to see that the government, together with partners and UNHCR in the country, are working on this,” Triggs said.