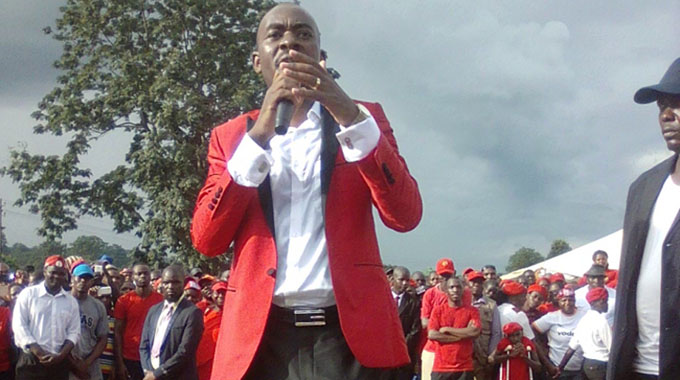 Victor Maphosa Mash East Correspondent
MDC Alliance leader Mr Nelson Chamisa has once again slammed the Zimbabwe Electoral Commission (ZEC) for not giving in to demands by the opposition.

Mr Chamisa, who was addressing Alliance supporters at a rally held outside Rudhaka Stadium in Marondera yesterday, accused ZEC of working in favour of the ruling ZANU-PF and President Mnangagwa.

“We know that ZEC is being influenced to work the way they are doing by the ruling party and Mnangagwa. But we will not compromise on the issue of the ballot paper and its printing.

Mr Chamisa said they wanted to see if ZEC was doing the process legitimately.

“We are not saying we want to print the ballot paper. Let ZEC do. All that we want to see is if they will do it right and if the paper is legitimate,” he said.

He said he was engaging the African Union and SADC on the issue of the ballot paper.

If no solution is found, Mr Chamisa said he will advise his supporters on the next move.

“We are not finding any solution to this matter so we approached AU and SADC to intervene. If no solution is found we will inform you on our next plan,” he said.

Mr Chamisa said the army must stay out of politics.

“We respect our army, but they must not be used to participate in party politics. Soldiers must be there for national duty.

“The army should not be afraid of losing their jobs when we get into power, we will not change the army hierarchy. They are our soldiers,” he said.

“We will address all your problems within a short period if we get in office. Zimbabwe will be a jewel for Africa by 2023. Vote for us for real solutions.”

He urged his supporters to be peaceful.

“I know I will win these elections. I know I will defeat Zanu-PF so there is no need to be violent. This election is an MDC election.

“I know the Zanu-PF team wants to steal the votes, but I told them that I will not allow them to do what they did to my senior, the late Morgan Tsvangirai,” he said.