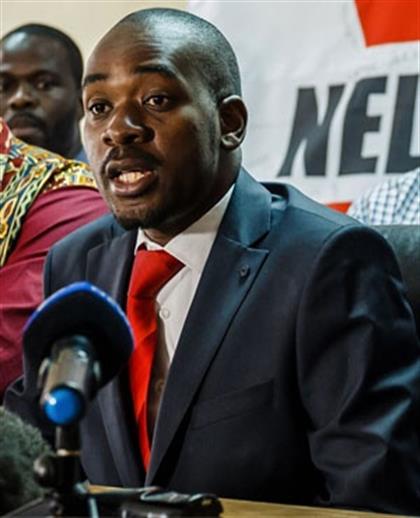 Zimbabwe’s ruling party says it plans to claim up to $3 million for legal costs incurred in the just-ended presidential petition, which the struggling MDC Alliance has been ordered to pay.

The nine-member Constitutional Court on Friday ruled that MDC Alliance leader Nelson Chamisa failed to substantiate his claims of vote rigging, and dismissed the application “with costs”, according to AFP.

The court ruling paved the way for Emmerson Mnangagwa’s inauguration on Sunday.

The ruling Zanu-PF secretary for legal affairs, Paul Mangwana, said the party’s lawyers had spent “a humungous amount of hours” preparing a defence against Chamisa’s claim.

“It is Chamisa who has to pay our lawyers. The law says if he doesn’t pay we will have to attach his personal property,” Mangwana told the state-run Sunday Mail.

He told the paper that “the ruling party’s lawyers were quantifying the exact amount due to them, but they had indicated an approximate bill of $3 million.”

The Zimbabwe Electoral Commission (ZEC), which hired its own lawyers to defend itself in the petition, hasn’t said what it’s bill will be.

The MDC on Monday put out an appeal to supporters to help it pay the legal fees.

“Please give generously, to fight this cynical ploy to silence a critical voice defending human rights, democracy and change in Zimbabwe,” the party said on crowdfunding site, GoFundMe.

“Let’s stand together because the journey to change requires each and every one of us to play a part,” it added.

A separate MDC statement says it will file a petition to the Gambia-based African Commission on Human and People’s Rights challenging Mnangagwa’s election win.

“The petition will pray and ask for a declaration that the result of the presidential election was a legal nullity,” the statement said.